About the maker, George Haynes
George Haynes, brother of the more noted William S. Haynes, made lovely flutes. He is thought to be the more technical creative genius, while his brother William S. is known to be the expert businessman.

Through the efforts of George, William and other craftsman, by 1920, the Haynes Flute Company was considered the principle flute maker in the United States, and recognized around the word as a very well respected flute maker. Prior to that time, American flute makers were not respected. This was the culmination of over 30 yrs in the flute business, a collaboration of brothers and another gentleman with the name of Haynes (no relationship).

We know from the date that the Haynes flute was patented (1915); the William S. Haynes Company was a huge success, with a waiting list of over 5 years time. We also know that the Company remained a success for years and years, and the US Government was a huge client, purchasing many flutes for top military bands.

The story of George Haynes is much less known, but yet even more significant to the American History of Flute Making than was William S. Haynes, as without George, the William S. Haynes Flute Company probably never would have existed.

George was the flute player in the family, who was fascinated with the “new Boehm design flute”, created by Mr. Boehm & Mender. This flute design was much different and a huge improvement from the 19th century Classical flutes. George borrowed a Boehm flute from a Symphony player, studied the design, and then created a copy with improvements. He and his brother William then began creating flutes together, and studied under a few master craftsmen in the areas of metal and other specialties.

George was the first “HAYNES” to establish the Haynes Flute Making Company. In 1886, George Haynes established the George W. Haynes Co, was the first of the Haynes bothers to make and offer the Boehm style Haynes flutes, along with repair services, and is credited with making the first Boehm style flute in Boston.

It was one year later that brother William joined George, and while George designed and made the new Boehm Haynes flues, brother William studied flute making, and offered marketing and business services. There were many relationships and companies that were formed and changed, bought out and terminated over the next decade. The most significant being the flute making company in which brother William S. Haynes worked, purchasing the workshop, equipment, and technology from the George Haynes Company. By 1897, the two brothers had terminated their business relationship, and George was off tinkering in other areas. His curiosity was vast, and flute making was not his only interest.

William S. created his own company in the year 1900. 13 years later, following over 30 yrs in the business of flute making, four significant events took place, which put the William S. Haynes Company on the world map, and made American Flute Makers respected around the world.

1). In the year 1913, William S. began the patent process in Europe and the US for rolled drawn tone hole technology (which he claimed he invented). This was significant as it reduced the cost and time to make a flute, and enabled the “Commercial Haynes” product line.

2). In the year 1914, William S. Hayes Company submitted a flute along with engineering print to the US Patent Office, and was granted a US patent in 1915. This was a new flute, which fixed many issues with the Boehm flute that had troubled flute makers for years.

3). In the year 1915, the William S. Haynes Company made the strategic business decision to make all flutes in solid sterling materials.

4). Soon thereafter, the US Government began ordering Haynes flutes for top Military bands, the wait list was more than 5 years, and the William S. Haynes flute Company was a worldwide success.

So, what happened to brother George, the flute player, creative genius, and creator of the American Boehm flute?

Long before bother William filed patents and used rolled drawn tone holes, George was off making and perfecting the rolled technology, and making his own line of flutes. This nullified all of brother William’s patents in this area. George had perfected this technology, and his genius and skill in this regard was far better than that of his brother William. This showed again that George Haynes was the tinkerer and genius, whereas William S. Haynes was the marketer and strategic business expert.

Thus, George made his own flutes, such as this Masters Flute using his perfected technology of drawn rolled tone holes, and then went on to form business relationships making flutes and in other areas.

This George Haynes Masters Flute, made during 1922 – 1927, is an exemplary flute by George Haynes, the FIRST flute maker in the US to make the Boehm flute using drawn rolled tone holes. George was the first to make the Boehm flute in the US, first flute Company (George Haynes Flute Co Established 1886), and leader in the area of the rolled drawn tone holes technology which was better than what the William S. Haynes Company offered in the same time period.

George Haynes was a very significant part of American flute history, the flutist, tinkerer, maker of the American Boehm flute, owner of the first company in the US to offer the Boehm flute, and perfectionist of the rolled drawn tone hole technology, the technology that enabled flutes to be make faster

George was the genius behind much of what we know of the William S. Haynes Flute Company, and one of the father’s of American Flute History.


About this flute
This is a beautiful hand made all silver professional flute made by the George Haynes Company around 1922. It is all original, with stampings and a lovely case. It is in playing condition, with new(er) pads and corks, no dings dents or damage. It even has the original head joint tenon cover and lovely case.

This is a great instrument!

The flute in great adjustment. It plays with a smooth action and produces a full, robust sound that is in sharp contrast to the quiet, sweet tones of the French flutes of the period.


The case is original, in excellent shape, and has the markings as shown. This is the Masters Flute, a design and production flute similar to the William S. Haynes Commercial model from the same time period (drawn tone holes and Y arms).


This is the perfect for the person that wants a very high quality solid silver flute, to play at home, church, or with a small chamber group. It plays nicely at A 440 Hz, and feels good in your hands.

We are a global company and ships worldwide. Shipping and carrier will be determined based on customer location.

We price for cash and accept verifiable cashier’s checks. We do accept PayPal, credit and debit cards, and bank wire transfers. These costs are not included in our pricing. 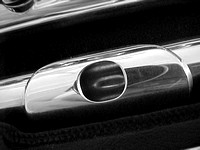 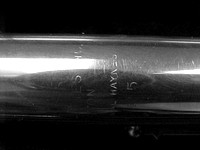 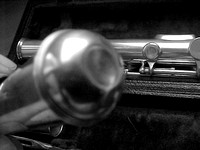 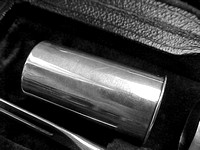 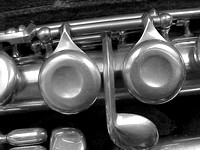 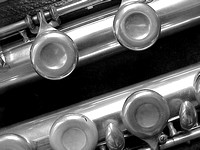 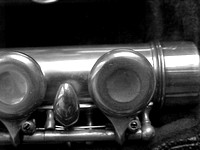 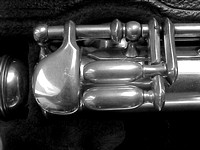 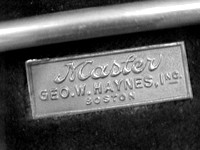 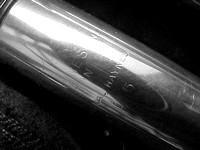 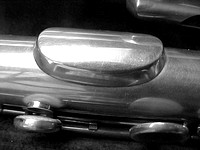 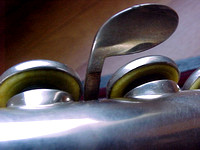 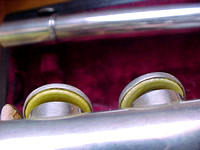 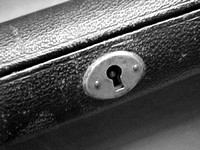 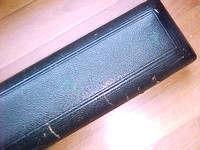