This is a fine flute by L. LeBret, a revered famous French Flute Maker who worked and studied his craft under Louis Lot. Considered to be among the famous flute makers Lot, Bonneville, Godfroy, and Rive

This LEBRET is GORGEOUS and Features


ABOUT THIS MAKER
Louis Léon Joseph Lebret (b.1862) is considered to be among the most famous French Flute Makers or Boehm style flutes of the 19th Century.

Lebret spent a decade employed by the Louis Lot firm learning the flute making craft. In 1888 he set up an independent shop in Paris and devoted a long career specializing in metal Boehm flutes until turning over the firm to René Celles in 1928, who was then succeeded by Robert Malerne in 1932.


Peter Spohr puts it quite succinctly, "Lebret belongs together with Lot, for whom he had worked previously, Godfroy, Bonneville and Rive to the famous French makers of Boehm flutes in the 19th century."

As a make of fine flutes, Lebret developed specific traits to distinguish his flutes from other Houses of Fine Flutes. They are produce a very warm beautiful and sweet tone and are quite distinctive in the style of their key work.

MATERIALS of this Flute:
The head joint MAY BE solid silver but please assume it is silver plated when evaluating this flute for purchase

The flute keys and mechanisms are silver plated


I do not see any seaming


FLUTE CONDITION
Flute has been sitting for years and years. All parts are original. Keys move up and down freely. The flute does play a few notes, and sounds really nice on a few notes. Will need all new pads / corks / felts / oil / head cork / adjustments should its new owner wish it to play to its full potential

The tubes are straight (no bends). I do not see any evidence of past repair (solder)

NOTE: The pins are in visible. Many times, in repair a not so great repair person will just buff off the pins ! This flute appears in excellent physical condition 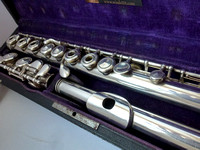 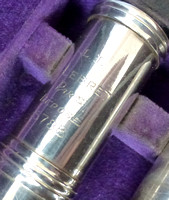 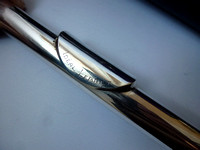 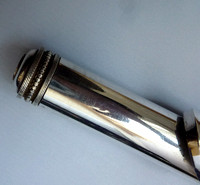 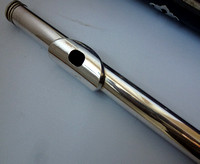 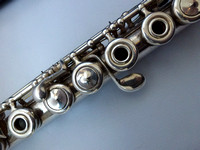 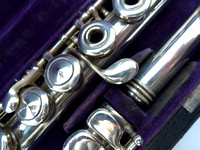 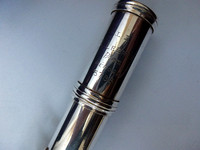 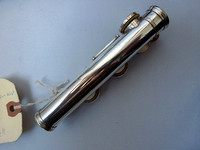 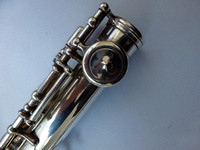 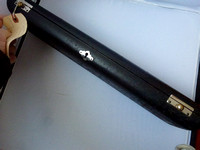 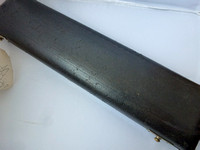